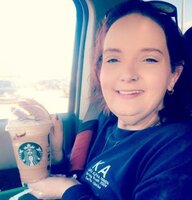 Jana Shane Moore Blair of Gallatin, age 48, passed away unexpectedly on 2 October 2021. Visitation will be on Wednesday 6 October 2021 at Family Heritage from 11:00am to 1:00pm with graveside service and interment at 1:30pm at Anderson and Son Cemetery in Lafayette. The family always called her Shane, but her many friends called her Jana. She was also called ‘Pickle’ by her best friend Christina Douglas and ‘Pebbles’ by her sister Jennifer Diane Moore. Jana Shane was married to Charles Robert Blair and loyally took care of him as his health failed until his death in 2017. They did not have any children, though they did have several four-legged children. She enjoyed reading and devoured books just like her father. She loved cross-stitching and recently began helping tack quilts that are donated to a local hospital. She loved heavy metal music and wanted to go to Finland to meet one of her favorite bands. Shane also loved animals. She had a warped sense of humor just like her father. When she loved, it was with all of her heart. She was a fierce friend that you wanted on your side. Shane was born on 8 March 1973 in Tucson, Arizona to Roy Wayne Moore and Betty Joy Carver Moore. The family moved to Gallatin, Tennessee while she was young. Shane moved to Memphis, Tennessee shortly before High School. In Memphis she attended Westside High School and made many close friendships there. After she married, she moved back to Gallatin, also living in Portland and Westmoreland. After a near-fatal accident, she moved again to Gallatin to be with her mother and sister. Shane was preceded in death by her husband, Charles Robert Blair. Also preceding her in death were her grandparents Gerfin and Oma Carver and Roy and Thelma Moore. As well as, her father Roy Wayne Moore, Aunt Wanda Miller, Uncle Larry Moore and cousin Leland Bradford Stubblefield. She is survived by her mother, Betty Joy Moore, her sister, Jennifer Diane Moore, step-mother Alice Moore, step-sister Amy Hill-Poehlein, step-brothers David and Eric Hill. Also by Aunts Sandra Stubblefield of Gallatin and Linda Avery of Mississippi. Many cousins including Michael (Betsy) Stubblefield, Jerry (Lori) Stubblefield, Jerremy Stubblefield, Cody (Anna) Stubblefield, Logan Stubblefield, Chelsea (Taylor) Stubblefield, and Olivia Stubblefield. Also cousins Tammy McCarver and Cindy Gabbert of Ashland City, Bo Gabbert of Nashville, James Bowers, Roy Moore from Texas, and Richard Avery.