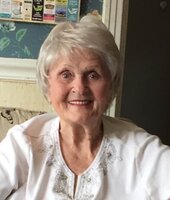 Nancy grew up spending summers at her grandmother’s dairy farm in upstate New York which she often said were her happiest memories. She was a natural at painting, upholstering furniture and sewing. Her first job was at Hartman Luggage in Lebanon, TN then, she went on to hold several seamstress jobs as well as an upholstery job with a boat company in Lebanon. Employed with AVCO and Cross Continent Aircraft in Smyrna, she worked sewing and upholstering as an interior mechanic on airplanes. Nancy was a hard worker. She cleaned banks and buildings until the age of 82. An amazing southern cook, she enjoyed watching Vanderbilt basketball and football.