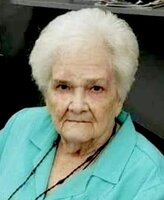 Ms. Edna Maurell Davis McCarter, age 92, of Lafayette, passed away Sunday Morning, November 13, 2022, at her residence. Funeral services for Edna McCarter are scheduled to be conducted on Tuesday, November 15, 2022 at 1 PM from The Chapel of Alexander Funeral Home with Jack Honeycutt officiating. Interment will follow in The Leonard Cemetery.

Family requests donations be made towards The Leonard Cemetery.