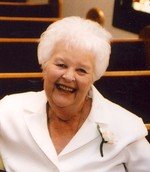 Mrs. Vida Wilson - age 74, of Lafayette, passed away on Friday May 11, 2012 at the Centennial Medical Center in Nashville. Funeral Services for Mrs. Vida Wilson are scheduled to be conducted on Sunday May 13, 2012 at 4pm from the Chapel of the Alexander Funeral Home with Brother Barry Miller officiating. Serving as Pallbearers were Jeremy Wilson, Phillip Church, Joe Parsons, Andy Graves, Ricky Wilson, and Nicky Wilson. Interment will follow in the Drury Cemetery. Vida Willene Smith was born on September 20, 1937 in Lafayette, Tennessee to the late Emmitt Cecil Smith and Bonnie Lois White Smith. She was one of five siblings born to this union. Besides her parents; one brother, Ferrell Smith, and one sister, Hilda Smith also preceded her in death. She was married to the love of her life Clifton Wilson on September 27, 1957. They shared a journey of fifty-four years together and raised two sons. Vida's family was what her life revolved around. The love and care Vida had for her husband and sons were unconditional. Family gatherings and being with her grandchildren gave Vida great joy. Early in life, Vida worked for several years at local garment factories. Later, she went to work for Carter's Automotive where she worked as an assembly line worker, until retiring. Vida had a personality that everyone loved to be around. She had a smile that would light up the world and always had a kind word to say. In 1950, something wonderful happened to Vida that made her life complete, she was saved. She joined Brattontown Missionary Baptist Church, where she remains a member. For the last few years, Vida had dedicated her life to caring for husband, Clifton. Clifton and the family will greatly miss her, but our loss is Heaven's Gain. Vida is survived by; Husband, Clifton Wilson, Sons and Daughters-in-law, Elder Ricky (Teresa) Wilson, and Nicky (Teresa) Wilson, Sisters, Iona Key, and Glennis Wheeley all of Lafayette, TN, 4 grandchildren, 9 great-grandchildren, and a host of nieces and nephews. Alexander Funeral Home, Directors, in charge of arrangements. (615)666-2189 or www.alexanderfh.com