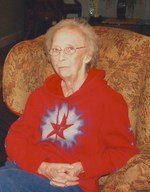 Rachel Ann Dotson was born in Macon County KY, on December 1, 1935 to the late Willie Smith Austin and Pricilla Beatrice Krantz Austin. She was the second of four siblings born to this union. She was married to Sammie Ray Dotson on November 6, 1954. They made a home and cherished life together until the Lord called Sammie home on April 3, 1986. Rachel and Sammie had a farm. They worked side by side growing tobacco and tending livestock. Rachel worked at Form-fit Rogers for several years. Later in life, she worked in housekeeping at Knollwood Manor, until retiring. Besides her husband and parents, one brother, Arvid Austin also preceded her in death. Rachel loved her family and having her nieces and nephews around made her life complete. Rachel was saved and a member of Liberty Missionary Baptist Church. On Wednesday, November 7, 2012 the Lord called Rachel home. She will be greatly missed by all who knew and loved her, but is now resting peacefully in Heaven. Funeral services for Rachel were conducted on Friday, November 9, at 1 p.m. from the Chapel of Alexander Funeral Home with Elder Jeff Blackwell and Elder Todd Austin officiating. Ben Cook, Byron Cook, Brandon Meador, and Terry Cook served as Honorary Pallbearers. Ricky Meador, Mikie Meador, Robbie Meador, David Austin, Chris Austin, and Greg Austin served as Active Pallbearers. Interment followed in the Galen Cemetery. Rachel is survived by; Special Niece, Rhonda Cook, Sister, Ruth (Gordon) Meador, Brother, George (Sandra) Austin, Sisters-in-law, Marie Austin, and Dean Austin all of Lafayette, TN, and several nieces and nephews, also survive.