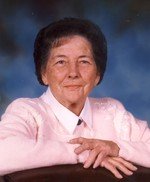 Ms. Ola Marie Leath - age 86, of Westmoreland, Tennessee passed away on Sunday, June 5, 2011 at Westmoreland Care & Rehab. Funeral services for Ms. Ola Marie Leath were conducted Wednesday at 11 a.m. from the Chapel of the Alexander Funeral Home with Elder Landy Presley and Reverend Larry Sloan. Cody Clark, Dale Turner, Shawn Turner, and Jason Russell served as Honorary Pallbearers. Gary Leath, Mike Clark, Ricky Leath, Jason Clark, John Blankenship, and Don Blankenship served as Active Pallbearers. Interment followed in the Eulia Cemetery. Ola Marie was born on January 3, 1925 to the late Desolive and Eunice Vide Carmouche in Marksville, Louisiana. On November 25, 1944, she was married to Andrew Leon Leath sharing twenty-four years together. Their life together ended on May 17, 1968 when he passed away. Besides her husband and parents; son, Ronald Wayne Leath, brothers, Dallas Carmouche, and Charlie Carmouche, sisters, Una Smith and Mary Vaden, also preceded her in death. She never backed away when it came to hard work. Ola Marie worked for the Shirt Factory for 19 year, Carter's Automotive for 10 year and Dollar General for 3 year. Raising four children kept her busy too, but that was her biggest joy in life. She was a loving and caring mother, grandmother, and great-grandmother. You could usually find her in the kitchen canning her vegetables or cooking for her family. She liked to be outside in her yard and garden as much as possible. Ola Marie was a member of Eulia General Baptist Church. She leaves behind lasting impressions and many memories for her loved ones and friends. Ola Marie will be greatly missed. She is survived by; Sons, Harold (Betty) Leath, and Teddy (Cathy) Leath, Daughter, Carol Ann (Judson) Clark of Westmoreland, TN, Brother, Donald Carmouche of Alexander, LA, Sister, Doris Davis of Lafayette, TN, nine grandchildren, and nineteen great-grandchildren. Alexander Funeral Home, Directors, in charge of arrangements. (615)666-2189 or www.alexanderfh.com