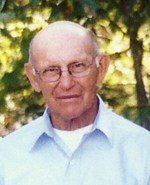 MR. HOLLIS SHRUM- age 82 of the Oakdale Community in Macon County, Tennessee passed away late on Tuesday evening, June 21 at the Palace Care and Rehab in Red Boiling Springs. Funeral services for Mr. Hollis Shrum were conducted Friday at 2 p.m. from the Chapel of Alexander Funeral Home with Elder G.W. Knight officiating. Jake Miller, Jesse Miller, Chad West, Larry Wilson, Keith Shrum, and Ralph Jenkins served Pallbearers. Interment followed in the Macon County Memorial Gardens. On April 18, 1929, Hollis was born to the late Herlie Benton and Melvin Olline Smith Shrum. He was one of four children born to this union. Besides his parents; brother, Larry Shrum, and sister-in-law, Ruthie Shrum also preceded him in death. Hollis married the former Wanda Sue Jenkins on October 9, 1954. They had a wonderful life together, sharing fifty-six years together and raising three children. Along with public jobs, Hollis worked on the farm raising tobacco and cattle. In 1977, he retired from Kroger and farmed full time. He continued to raise big gardens every year sharing with his neighbors and friends. Hollis enjoyed going out for a day of fishing or to play sanded court croquet with his family. If you look through the family photos you will see the pride on his face, for his family. As a young boy, he was saved and joined Brattontown Missionary Baptist Church. In 1987, he was ordained a Deacon in the church and remained a faithful member. He was a good man and a loving husband, father, grandfather, and great-grandfather. He will be missed greatly by his; family, friends, and his church. He is survived by; loving wife, Wanda Shrum of the Crosslanes Community in Macon County, TN, son, Ronnie (Shelia) Shrum of the Green Valley Community in Macon County, TN, daughters, Debra (Barry) Miller of the Brattontown Community in Macon County, TN, and Tina (Randy) Norman of Wilson County, TN, Grandchildren, Leslie (Chad) West of the Underwood Community in TN, Jake Miller of Brattontown Community in Macon County, TN, Jesse Miller of Smyrna, TN, and Kymberlee Norman of Wilson County, TN, great-grandchildren, Garron West and Landon West of the Underwood Community in TN, brother, Lynn Shrum, sister and brother-in-law, Patsy (Vic) Wilson, and sister-in-law, Juanita Shrum all of Lafayette, TN. Alexander Funeral Home, Directors, in charge of arrangements. (615)666-2189 or www.alexanderfh.com