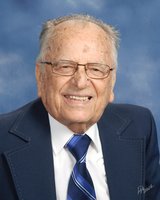 Mr. Jankowski and his family were forced into Nazi labor camps during WWII where he survived 51 air raid bombings.  He emigrated to the United States after the war and eventually settled in LaPorte, Indiana where he married and raised his family.  He is a Korean War veteran, having proudly served his new country in the Army.  Mr. Jankowski was a retired Quality Control Engineer with Howmet Corporation in LaPorte, Indiana where they manufactured precision components for the aerospace industry.

After retirement, Mr. Jankowski and his wife moved to Lebanon, TN to be close to family where he joyfully supported their activities and was a faithful member of St. Frances Cabrini Catholic Church.

Visitation with the family will be Wednesday, May 29, 4:00 – 7:00 pm at Sellars Funeral Home in Lebanon.  Funeral mass will be Thursday, May 30, 11:00 am at St. Frances Cabrini Catholic Church in Lebanon with Father Michael O’Bryan and Deacon Jim Dixon officiating.  Mr. Jankowski will be laid to rest at Wilson County Memorial Gardens.  Pallbearers are Caden Leach, Jeffrey Leach, James Wiggington, Charles Roberts, Bobby Vaughn, and John Pawlowski.