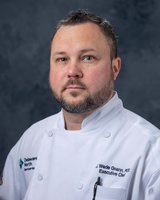 Wade attended Aiken High School in Aiken, South Carolina, where he graduated in 1994.  He then attended the College of Culinary Arts at Johnson and Wales University in Charleston, SC.

In 2003, Wade met the love of his life, Deserea, at the Bonnaroo Music and Arts Festival in Manchester, Tennessee.  Wade and Deserea were happily married in 2008.  They have two beautiful children, Emma Monteen and Kellen Wade, as well as Ellsie, who became part of their family in 2016.

During Wade's 15 year career with Delaware North, he had become a certified Executive Chef and later became a certified Chef de Cuisine. He proudly held the title of the Executive Chef at Bridgestone Arena for the Nashville Predators hockey team.  His Delaware North and Bridgestone family fondly referred him to as "Chef".  Wade was a creative, dedicated, hardworking chef who not only was a mentor to his staff but treated them as family.

Aside from Wade's admiration of cooking for others, he had many hobbies and interests that he held close to his heart.  Wade was very passionate about music and his love for the Grateful Dead and Widespread Panic.  You could always find him dancing his infamous Wade "dance" we all grew to know and love.  He enjoyed traveling and attending concerts as well as gardening, tinkering in the garage on his many projects, and racing his RC car.

Wade always had a smile on his face and truly had the biggest heart.  He loved being around his friends and family always willing to lend a hand and help in any way he could. Everyone would tell him he was an amazing chef but he would tell you his greatest creation was his children.

"Fare you well, fare you well I love you more than words can tell" - Grateful Dead