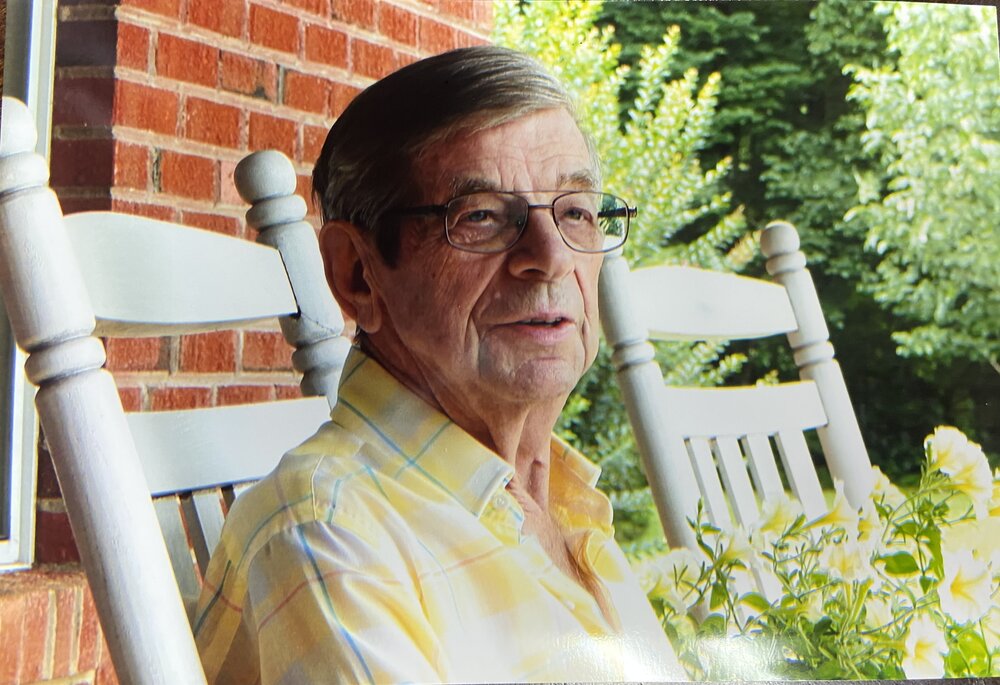 Frank K Bell, Jr, formerly of Nashville, died on December 3, 2021. Frank was preceded in death by his wife, Opal Allen Bell; his parents, Frank Kingcannon Bell, Sr and Anna Lee Curtis Bell, and his sister Francis Walene Bell. Frank is survived by his son and daughter-in-law, Bruce and Anita Bell of Mt. Juliet and by his granddaughters, Laura Bell of Lebanon and Jenny Bell of Mt. Juliet. Also surviving is his sister-in-law, Dorothy McMahan of Nashville. Frank was born and raised in McMinnville, TN. He lived there most of his youth, except for a short stint when his parents moved to Detroit for jobs. The family had a farm in McMinnville, and Frank graduated from McMinnville High School in 1948. After High School, he worked at the Genesco Shoe Factory, where he met his life’s love, Opal Allen. In July 1951, he joined the United States Air Force. That December he and Opal eloped, and one week later he was shipped to Europe. In his four years in the air force, he was also stationed at Greenville, South Carolina and Silver City, New Mexico, where he briefly attended New Mexico State College. His favorite assignment, however, was when he was in Munich, Germany. He often told stories about being stationed there and his adventures traveling around Europe. He left the service as a staff sergeant. Frank and Opal settled in Nashville after his discharge from the Air Force, and he became employed by South Central Bell, later AT&T, in 1955 as a telephone installer. They spent many years at their home on Elaine Drive, raising their son Bruce. They were married until Opal’s death in 2006. After Frank’s retirement from AT&T in 1985, he decided to work for Concepts in Communication before retiring again in 1994 to be a full time Grandpa. Frank was known for his admirable work ethic and creative mind. He loved tinkering, especially with lawn mowers, and often came up with novel solutions to problems. He enjoyed fishing, pitching horseshoes, working in the yard, watching football, doing crossword and jigsaw puzzles, and sitting in his porch swing in the back yard. He was a loyal friend and a good neighbor. Frank was a unique man. He was both a gentleman and a gentle man. He was quiet and modest and lived simply, yet he made a huge impact on those who knew him. Perhaps the ones most influenced by Frank were his family members. He and his son were very close, as they were very much alike in temperament. He treated his daughter-in-law as a daughter. The ones he most doted on, however, were his two granddaughters. He was the epitome of the perfect grandpa. Frank enjoyed cooking breakfast for his girls when they visited. He loved to play games such as pinching pennies, Old Maids, baseball, and Chinese Checkers with his granddaughters and was very proud of them for graduating college and carrying on the Bell work ethic. He loved his “Babe” and “Peanut” beyond measure. Once, when asked his life philosophy by one of his granddaughters for her school project, he replied, “Be frugal, and save money. Be honest, and stick to your word. Be dependable. Be sociable. Be kind to other people. Treat people like you want to be treated.” He lived this philosophy, which is why he was so well loved. One of the places he was well loved was Carrick Glen, where he had lived since 2019. The family is very appreciative of the loving and warm care he received there. They were a second family to him, especially during this time of Covid, when visitation was often restricted. Visitation for Frank will be Wednesday, December 8th from 10-12 at Sellars Funeral Home at Mt. Juliet. A private graveside service will be held at Dekalb Memorial Gardens in Smithville. Arrangements by Sellars Funeral Home at Mt. Juliet, 2229 N. Mt. Juliet Road, Mt. Juliet, TN 37122, 615-758-5459, obituary line 615-758-8818, www.sellarsfuneralservices.com.

Share Your Memory of
Frank
Upload Your Memory View All Memories
Be the first to upload a memory!
Share A Memory