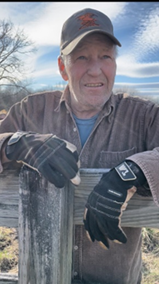 Lloyd was born in Denver, Colorado, March of 1952.  Raised in Matheson Colorado, he attended Simla High school where he played music at high school dances, played football, wrestled and held the high school pole vault record for several years.  He joined the United States Marine Corps which brought him to San Diego, California.  Storytelling and music were always a part of his life.  He sat in with the band at the YMCA USO one night and his world was changed forever as he met his wife Ann.  They married young and were able to enjoy 49 years of adventures.

Together they moved back to Colorado, raised two children, sang and performed for years professionally. He enjoyed gathering with family, camping and trout fishing and especially watching the Denver Broncos. He volunteered his time as a track coach and Cub Scout leader.

The music eventually brought their adventure to Nashville where he had many careers, from the airlines, Sheriff’s Office, construction industry, to retiring from the Nashville Public Library.  They continued their pursuit of music for several years.  Lloyd settled on a small farm, raised some cows and mowed a lot of grass.  After retiring from the library, he felt called to give back to his community as a substitute teacher.  His past experience and witty sense of humor coupled with tales of mischievous shenanigans from his youth proved a successful combination for the students of Mt. Juliet.

Lloyd was passionate and strong in his convictions and a patriot.  He loved fiercely and was a true romantic.  He was a great husband, father, grandfather and mentor.  His warm and kind personality touched many lives, and he will be greatly missed.

The Funeral Service will be held on Thursday, September 15th at 3pm at Sellars Funeral Home at Mt. Juliet with Bro. Scott Moore officiating. The Visitation will be held on Wednesday, September 14th from 5-8pm and on Thursday, September 15th from 2pm until time of service at 3pm. The Interment will follow the service at Mt. Juliet Memorial Gardens with Jerry Barnett, Jerry Ager, Rick Ager, Charles Curio, Jason Medina, and Ralph Whitehead serving as pallbearers; and Harold Bennett serving as an Honorary Pallbearer.

Share Your Memory of
Lloyd
Upload Your Memory View All Memories
Be the first to upload a memory!
Share A Memory