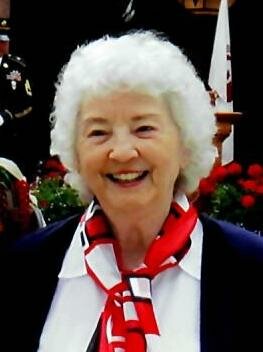 Patricia was born October 11, 1928 to parents Jacob S. Dodder and Ruth E. Dodder in Bellevue, Michigan. She was the oldest of five siblings: Virginia, Doug, Gordon, and Jean. All proceed her in death except her youngest sister, Jean, who lives in Fairbanks, Alaska.

Patricia worked as a Western Union telegraph girl after high school in Chicago, Illinois. She married Robert “Bob” Vaught in 1948. Together they had four children: Doug, Teresa, Bill, and Mary Beth. Patricia went to nursing school and became a registered nurse working at Wayne County General Hospital in Waynesboro, Tennessee, as a charge nurse and Director of Nurses until. Pat and Bob moved to Nashville where she worked at the Veterans Hospital proudly serving the veterans in the Kidney Transplant unit until she retired in 1993.

Patricia loved being with family and friends, always smiling and playful. She enjoyed early morning walks, traveling, and was an avid reader. She led a Christian Women’s Bible Group for many years.

Patricia was proceeded in death by her loving husband of 70 years, Robert Vaught. She is survived by her children: Douglas Vaught (Jenn), Teresa Vaught Cobble (Jeff), William “Bill” Vaught (Sandra), and Mary Beth Vaught Harrington (Eddie). She also is survived by her grandchildren: Jeff Jacobs, Andrew Norman, Nicole Norman, Isaac Vaught, along with Chris and Jennifer.

Patricia had two loving dogs that helped her with her struggle with dementia, Charles and Zeke, who acted as emotional support animals.

Share Your Memory of
Patricia
Upload Your Memory View All Memories
Be the first to upload a memory!
Share A Memory