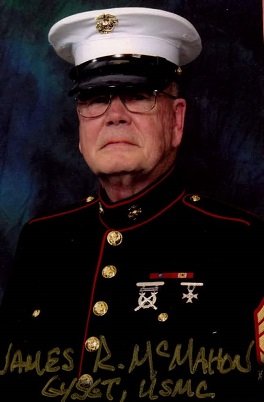 “If the Army or the Navy

Ever looked on Heaven’s Scene,

They will find the streets are

Excerpt from “The Marines’ Hymn”

The Gunny received permanent change of station orders to report to St. Peter, for further duty on Saturday, 24 March 2018.

Richard was born 17 October 1931, to the late Hardie “Tim” McMahon and Alice Petty McMahon, the eldest of seven children, raised in Nashville, attended the Public Schools, and graduated from Hume-Fogg Technical & Vocational High School in 1950, where his major study was Commercial Art.

Korea attacked South Korea on 26 June 1950.  He remained on active duty, serving at various Marine Corps installations until 31 January 1970, when he retired at Headquarters U. S. Marine Corps in Arlington, Virginia with his current rank of Gunnery Sergeant.

Richard met the love of his life, Pauline Elizabeth Craft originally from Pineville, Kentucky, while he was stationed in San Diego, California, and Pauline was working as a cashier at one of the local movie theaters.  After Richard returned from Okinawa, they were married on 26 June 1957.  For more than 56 years, they shared a life of good times together.  Pauline preceded Richard in death on 25 October 2013.

After returning to middle Tennessee, in November 1970, he worked at the Baptist Hospital Maintenance section, while attending evening classes at Nashville State Technical Institute.  He began employment with the Tennessee Department of Employment Security in January 1972 as a second shift Computer Operator, continuing his classes during the day, earning two Associate Degrees.  He continued his employment with the State, retiring in January 1992  as a Computer Systems Specialist.

Richard’s love of model railroading led him to become a member of the Tennessee Central Railway Museum, located on Willow Street, in Nashville.  He began volunteering as a Car Host for the many Saturday excursions that are scheduled each year, from February to December, by the Museum.

Richard served as Chairman of Deacons, in both Cottontown Baptist Church and New Hope Baptist Church, in Hendersonville, Tennessee, for more than 30 years.

Arrangements are being handled through Alexander Family Heritage Funeral Home, 100 Albert Gallatin Avenue, Gallatin, TN, with Military honors.  Entombment will be at Sumner Memorial Gardens, in the Mausoleum, where he will be near his Pauline for eternity.

In lieu of flowers, please make your contributions to the HighPoint Hospice, Gallatin, TN.  Online condolences may be submitted at alexanderheritagefh.com.  Alexander Family Heritage Funeral Home has been honored with arrangements.

Share Your Memory of
James Richard
Upload Your Memory View All Memories
Be the first to upload a memory!