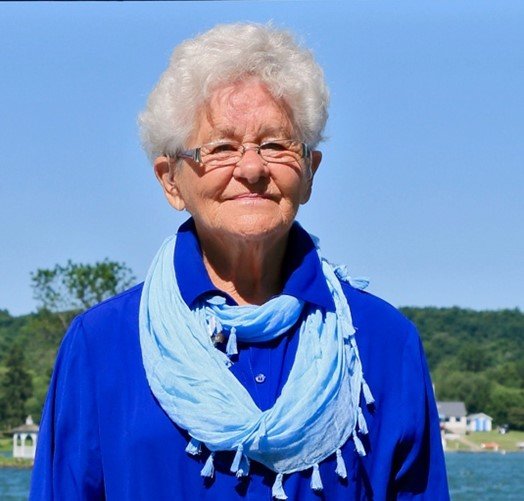 Tula Mae Collins Standbrook (17 March 1930 – 17 August 2020) passed away on 17 August 2020 at Vanderbilt Hospital after a short illness. She was born in Ardmore, Alabama and grew up in Middle Tennessee. Tula graduated from Columbia Central High School in 1949 and moved to Nashville to go to business school. In 1951, she met and married Ralph W. Standbrook, a young paratrooper from New York stationed at Fort Campbell, Ky. They were married for over 50 years, until his death in 2004. During Ralph’s 22-year Army career, Tula raised three children, moved the family and made a home in over a dozen states. When Ralph retired in 1972, they moved to a farm in Summertown, TN and later moved to Columbia, TN in 1977. In 1987, they moved to Fair Haven, NY. After 32 years in NY, Tula moved to Mount Juliet, TN in 2019 to be closer to her children. Tula’s happy, loving spirit combined with her unique Southern accent made friends wherever she went. She loved reading, gardening, chubby babies, dogs, Mexican food, and caring for her family. Adored by her grandchildren and great grandchildren, she was never short of faith, hugs and kisses, and homemade treats. She was an active member of the Red Creek United Methodist Church for over 30 years and an eternal optimist. With over 60 years as an Army Wife-Mother-Grandmother, nothing overwhelmed her, she could always reassure you “everything is going to be all right.” She is preceded in death by her parents, Ulna and Clara Mae Collins; her two sisters, Rebecca Toone and Sarah Bea Hastings; and her husband, LTC Ralph W. Standbrook. Tula is survived by her three children, Fred C. Standbrook of Joelton TN, Susan Marshall of Old Hickory, TN, and Ralph T. Standbrook of Austin, TX; two daughters-in-law, Susan Copeland Standbrook and Susan Dugger Standbrook; six grandchildren, Amanda Graves, John Marshall, Megan Standbrook, Berean Standbrook, Jonathan Standbrook, and Abigail Standbrook. She has 4 great-grandchildren, Josephine, Tula Mae, James, and Clara Louise. The Funeral Service will be held in the chapel of Sellars Funeral Home at Mt. Juliet on Friday, September 11th, 2020 at 2:00 p.m. The family will receive friends on Friday, September 11th from 12:00 p.m. until service time at 2:00 p.m. Interment will be held at a later date at Arlington National Cemetery in Arlington, Virginia. In lieu of flowers, the family respectfully request memorial contributions be addressed to: Johanne A. Van Der Linden Deputy Chief Village of Fair Haven P.O. Box 614 Fair Haven, N.Y. 13064 931-947-5112 Arrangements by Sellars Funeral Home at Mt. Juliet, 2229 N. Mt. Juliet Road, Mt. Juliet, TN 37122, 615-758-5459, obituary line 615-758-8818, www.sellarsfuneralservices.com.

Share Your Memory of
Tula
Upload Your Memory View All Memories
Be the first to upload a memory!